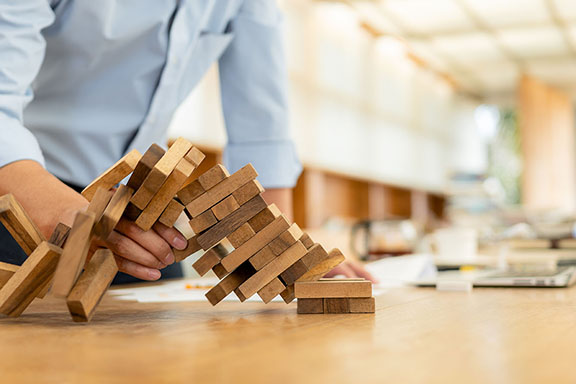 Working Through Your Fear of Failure

There’s no doubt about it; failing sucks. The fear of failure can be so strong in some people that it’s more powerful than their desire to succeed. In some cases, people’s subconscious minds will sabotage their chances at moving forward completely unconsciously. The thing about fear is that it’s part of human nature. Your fear response is there to protect you from life-threatening danger. Unfortunately, the fear response can sometimes kick in when the danger isn’t life-threatening, resulting in a seemingly insurmountable emotional roadblock.

Where Does Fear of Failure Come From?

We aren’t born with an inherent fear of failure – it generally stems from one or more instances where failure resulted in some form of emotional distress. Over time, we connect failure with the emotional stress in our subconscious minds, often creating a fear of failure where there once was none.

Overly-critical parents, caregivers, and friends can cause a child to internalize a mindset where failure is meant to be feared. People who are overly-critical tend to establish ultimatums and/or rules that are based on inducing fear. When a child is forced to constantly ask for permission and reassurance early in life, they may continue to feel this way as they get older.

How confident are you? People who are truly confidant know that failure is going to occur once in a while. People who are success-minded and have strong self-confidence are much more willing to take risks than those who would rather play it safe and avoid taking chances.

Sometimes a person will identify too strongly with their failures. They may have trouble looking beyond and noticing some of the positives, such as their motivation, or some part of their experience that they performed well, despite ultimately failing. It can also cloud your judgment and make it more difficult to learn from your failure – and that’s a big problem. If you learn from your mistakes, you’ll only become more successful as time goes on.

Overcoming Your Fear of Failing

Second, you’ll want to reframe how you look at your goals. People who have an all-or-nothing mindset often fear failure because they cannot see the smaller successes in the midst of failure. Your mindset should be one of confidence, yes, but a desire to improve as well. By learning to identify the places your efforts were successful along the way and learning from your failures, you will gradually become better at achieving your goals.

Third, you’ll want to look at the most probable negative outcomes, identify their causes, and make plans for how you’ll deal with them. Fear and anxiety often stem from the unconscious notion that you won’t be equipped to handle an unexpected situation. By creating a plan in your mind, you can help ease your anxiety because you now have a plan for when the worst happens.

Keep in mind that you can’t plan for everything. Come up with two or three of the most possible negative outcomes and plan from there.

Author and businessman, Tony Velasco, teaches the principles by which he built a multimillion-dollar business enterprise in his 20s. He lives in Valencia, CA with his wife, Allison. Tony believes that the prospect of losing is a part of growth, and greater than failure we should fear regret, in all things, at all costs.

His soon-to-be-released book, F**K Regret offers a step-by-step description of how the author executes every aspect of his daily life, how he was able to sustain the shutdown of gyms and other businesses during the COVID-19 pandemic, and how he is rebuilding. Follow him on Instagram and at https://tonyvelasco.com